There is a Lantana bush in my front yard I call “Mattie’s Bush,” because my friend and wildlife photographer Mattie Bryant would spend hours photographing it from every angle.

This year because of all the rain we have had this summer Mattie’s bush is huge.  It almost spans the width of my side yard, and like every summer, it’s covered in butterflies and other nectar loving bugs.  This morning I decided to go out and take a few pictures.

There must be thousands, or perhaps over a million tiny blooms, each cluster of blooms can be as small as your thumb.

The most predominate of the butterflies are the orange ones, I have no idea what they are actually called.

There are so many in fact, it’s almost impossible to make a photograph without one in it.

At least they are pretty.

They are not alone on the bush, there are the ones I call “Orange Skippers.”  A sort of smaller, quicker version of the orange ones, perhaps they are cousins or something.  These guys have short wings, and they are quick!  I was lucky to catch one in a shot.

Easier to shoot is the “Bark Butterfly,” it’s mostly likely a moth, but I like to think of it as a butterfly.  Sitting still, it almost looks like the bark on a tree, it’s an interesting little bug.

What’s interesting is the gold patch on the wings, it shimmers in the sunlight.

Impossible to catch sitting still is the “Flying Fuzzy.”  I don’t have any idea what this is at all, it’s fuzzy, flies like a humming bird, and is about half the size.

The iridescent bands of blue are interesting.

I had a great time this morning photographing “Mattie’s Bush,” perhaps I’ll do it again soon. 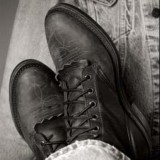 Ok… but I think I like what I call them better, much more descriptive. You can’t do much better than “Flying Fuzzy!” LOL! Usually I see Monarch butterflies on your bush as well, but they were not there while I was shooting. Two humming birds came close, but the moment they saw me the took off, too bad, I would have liked a shot of them as well.

The orange ones are Fritillaries , the one that looks like a humming bird are called hummingbird moths and the other is a silver Spotted Skipper.